I wanted to compare the performance per watt of the new M1 Mac mini against that of my Ryzen 1600X powered gaming PC. To throw some additional items in there, I also measured my Ryzen 4300U little Windows office PC as well and my Raspberry Pi 4.

The speed of the new M1 Mac has shown that Apple’s move to Apple Silicon has been a good move for them. Benchmarks show that it’s faster than some of the Intel and AMD machines. I’ve seen the similar when I ran FDS on the M1.

Idle was measured with nothing specific running and then full load was measured by running Distributed.net, which taxes the CPU of the device.

I’m interested to see that the power draw of both the M1 Mac and the AMD 4300U. I knew the 4300U is a laptop chip (the U implies it’s a laptop chip). I guessed the M1 was fairly low powered, but was impressed with how low. I guess the M1 and 4300U are fairly similar in measurements as both are essentially laptops in desktop form factor.

The 1600X is perhaps unfairly crippled in my measurements, as it’s also fitted with an nVidia GTX 1060, where the other devices are not. It’s also got a 2 x SSD’s and a 4TB hard drive, which could be increasing the measured power draw as well, compared to the others which have no moving hard drives in at all.

However, it gives a good indication of the power between a “standard” desktop, and a small form factor one.

Distributed.net is a distributed computing project. I run the OGR project, which tests mathematical problems.

I carried out a benchmark test for each machine, using the benchmark test within the application itself. This runs a number of tests to find the fastest core and gives an output in nodes that it can complete per second.

It should be noted that Dnet is not optimised for Apple Silicon and does not provide a compiled version specifically for it, so the program is run using Rosetta 2, which may have a performance hit instead of native performance. However, in this instance, it doesn’t seem to have effected the speed too much, as it came out on top!

Running each device at full load, the client spits out the following speeds. The 1600X comes out ahead of all the others due to it’s higher thread and core count compared to the others.

The M1 Mac is also based on the big.LITTLE architecture, so the first four cores are performance based, and the other four are lower power, slower cores. Without the smaller cores running, the average was about 399 Mnodes/s, with only a 2W reduction in power consumption.

When looking at the performance per watt, the M1 Mac is streets ahead of the others, with performance over 4 times that of the Ryzen!

I had some concerns that there would be temperature issues with the Mac mini running at 100%. It turns out that doesn’t seem to be an issue. The maximum temperature it reaches is 80ºC, which doesn’t cause the Mac fan to spin up audibly, so I’ve probably got some headroom there. Likewise, it wasn’t to much of a problem on the Ryzen either, as this shows that the temperatures are warm, but the device isn’t thermal throttling. 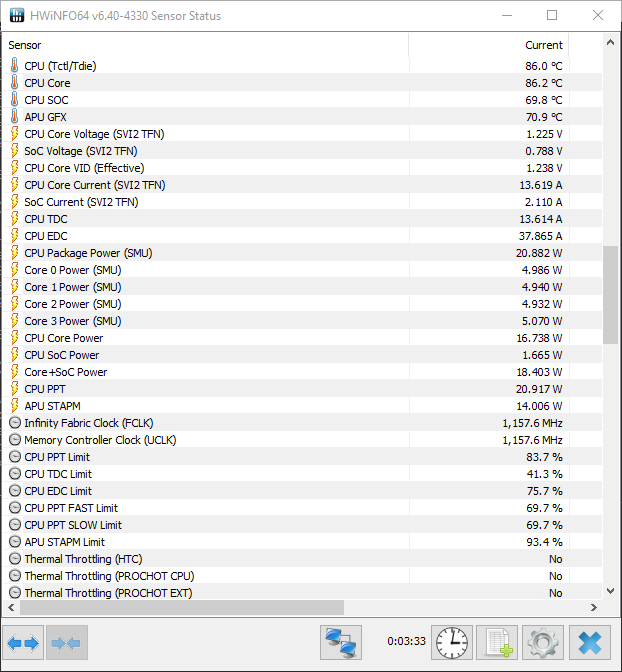 Overall, it’s happily running Dnet without any issues at all and I’ve had no issues with it during the day to day use of the machine. I do turn off Dnet when using the Mac but otherwise, it’s happily helping crunch problems.