So whenever I get a new machine, I always run an FDS benchmark on it - purely for fun and comparative purposes. I’ll often run it, even on a machine that isn’t likely to run FDS in a normal situations, such as the M1T Mini PC and Raspberry Pi.

So with the M1 Mac Mini, there was no reason not to run the benchmarks as well. However, as the M1 Mac is based on an ARM based chip, I wasn’t expecting it to perform that well - after all, it would be running on the Mac using Rosetta 2, as FDS is compiled for x86 processors1.

I ran my standard testing regime (the last FDS 5 release and FDS 6.5.3) against a benchmark file that was included with FDS 52. All benchmarks were purely of single core

Both ran fine without any issues what so ever. I was mildly surprised when I got the results.

Whilst FDS 5 is end of life now, and has been replaced with v6, it’s still worth running just to see how things have changed over the years. 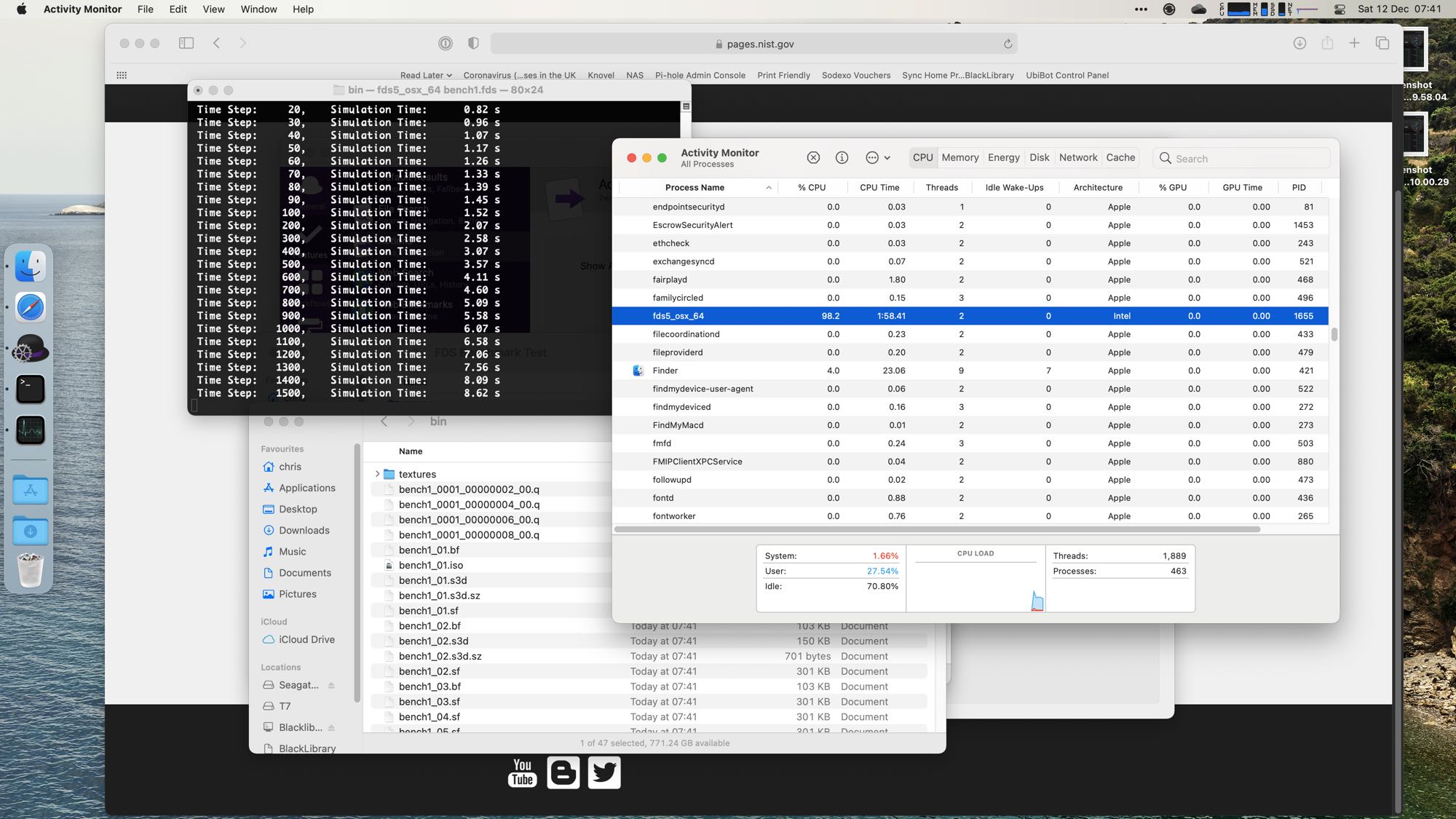 I keep all the records on a Google Sheet, so it’s visible to all here. However, a screen shot of the results is shown below.

The results of the M1 run show that the M1 chip, even using Rosetta, is the fastest chip I’ve tested!

FDS 6 worked without an issue as well. As normal, I set the number of MPI threads to 1, so that it’s a pure single thread test.

The result for this was a bit more muted - the results indicate that it took longer to complete than the other devices I’d tested, including the items it beat on the single core FDS 5 test.

Not quite sure why that’s the case, however, it demonstrates that the system runs FDS without issues.

Would I run FDS on it? Probably not - the max limit of 16GB of RAM will be an issue as will the limited number of cores3, this is reasonable performance for a PC that draws only 26W at full load!

Keep in mind my AMD Ryzen 5 1600X draws 149W at load - almost 6 times more electric, though only approximately 7% faster. However, where speed is primarily a factor, then the extra power draw may be worthwhile, but for my use case currently, this isn’t an issue.

Overall, it’s exciting to see the performance and it’ll be interesting to see how Apple continue forward with the Apple Silicon and see how this works with the more professional Macs in the future.