When I saw this announced by Garmin, I knew that it was something that I’d be interested in. I’ve flip flopped between Garmin and the Apple Watch over the last two years, often coming back to my Garmin Instinct Solar (and the non solar version before that). However, the reason for going back and testing the Apple Watch was for the onboard Siri support - being able to turn lights on and off in the house with my voice is handy, as well as the occasional quick text message or receiving a phone call whilst my phone is in my bike bag.

I managed to order it the next day from Amazon and had it arrive the day after.

Everything below is based on pairing the device with an iPhone 13 Mini on iOS 15. Other phones/versions of iOS may have a different experience than myself.

After getting the box out, I was quite impressed. The device is round (which I far prefer to the square Apple Watch) and weighs about the same as the Instinct it was replacing. It’s a similar size as well.

The screen is excellent - it’s the first Garmin I’ve used that has an OLED screen. By default, it’s set to activate the screen when you lift your wrist, as per the Apple Watches prior to the Series 6 and 7. We’ll see how I get on, as this was a bugbear with the Apple Watches after a while, especially when compared to the always on Fenix or Instinct.

Setting up, I thought I’d be running in to issues as I was presented with the following screen.

However, the device was able to be setup without any further issues. Not quite as elegant setup as the Apple Watch, but works.

The strap is a silicon strap, but it’s not as flexible as the Instinct strap. Not sure if it will get more flexible with wear but it’s not as comfy. However, as it uses a standard 20mm band, an alternative could be easily sourced.

So it’s a brand new watch, so I’m expecting some issues and hopefully, some of these will get sorted in the next few weeks with some updates, or even as I get used to the watch. 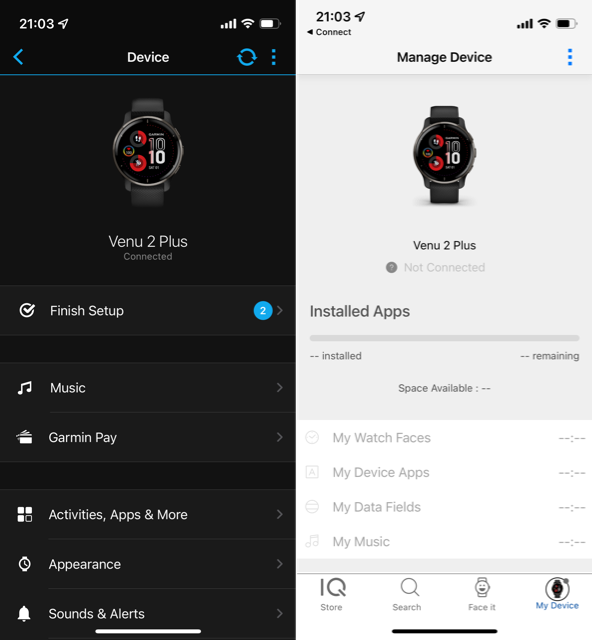 I’m able to use the device without issue otherwise. Anything from Connect IQ can be downloaded whilst plugged in to the computer using Garmin Express, so that isn’t to much of an issue.

Because of the aforementioned issue with the IQ store, I’ve only been able to download apps via connecting it to the PC.

A lot of the apps within the store need to be updated to enable support - a lot have support noted for the Venu 2, but not the Venu 2 Plus. This means I can’t install a number of data fields or watch faces that I want, including the excellent SHN TxD watch face, which I’d purchased for my Fenix 6 when I was trying that. 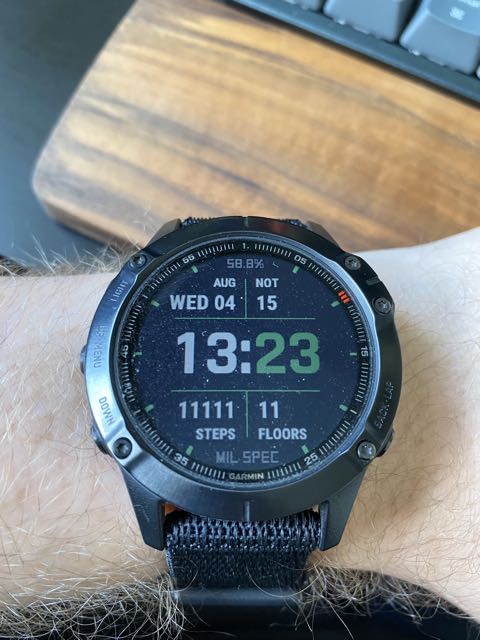 However, I have been able to install the excellent Walker data field, so that wasn’t to bad.

I’m hoping that this is rectified by app developers now that the new watch is available, but time will tell.

The watch can only be accessed via MTP. This means that for accessing it on the Mac, a third party program is needed. Windows doesn’t have any issues.

For most people this probably wont be an issue and they may never have to connect the watch to a computer. However, I like keeping a record of the FIT files that are recorded, so I can import these in to Rubitrack and have a personal backup. Grabbing them off the watch is significantly less time consuming than downloading them from Garmin Connect and having to rename them, so not being able to access them directly from the Mac is a bit tiresome - especially as the Instinct is accessible. However, I believe this is due to the fact that the Venu (and Fenix, which has the same “issue”) is because these devices can put music on to the device.

According to Garmin, the device has a limit on the amount of activities stored - 200 hours. I assume after this point, it deletes the old ones and replaces with the new.

This is better than the 7 activities that the Vivoactive 4 can have, which was the last touchscreen Garmin I used, but probably less than the Instinct, which can take 16MB. However, I’ll be charging the device up before I reach the 200 hour limit, so that is unlikely to be a practical limit I’ll reach myself.

Initial volume of Siri was remarkably low - I found I could barely hear it. However, I was able to figure out that I needed to increase the volume, not on the watch (which was at 100%) but on the phone using this guide.

Siri works well - I wondered how Apple had allowed Siri on the device, but it’s not on the device. The watch acts as a Bluetooth speaker and microphone, which is how it manages to work with iOS or Android. In fact, as its a Bluetooth speaker, there is some slight differences between how the Apple Watch Siri would respond to a query and how this watch responds. For example, after dictating a message, the Apple Watch will show the message on the screen and ask you if you want to send it, whereas the Venu 2 Plus will just send it.

There is a delay between pressing the button and Siri activating - far longer than if the Apple Watch was being used, or using the iPhone. This initially was a problem - in part because the volume was to low, so I wouldn’t hear once it had connected, as the watch vibrates when its connected, but that’s not when Siri is ready for voice control. However, once I’m aware there’s a delay and I can hear Siri is ready to go, it works fine. It should be noted that this needs the phone nearby and any timers etc are run on the phone and not on the watch - and that when the timer sounds, it doesn’t activate on the watch.

Of course, using “Hey Siri” doesn’t work either - as the pressing the button on the watch connects you to the watch and activates Siri.

The watch is an excellent device for standard use. I can see it being a decent seller for Garmin.

However, I’ve ended up taking the watch back and went for an alternative solution - the Garmin Instinct 2. I do the like the Instinct and when I saw that the 2 was released with the features (other than Siri) that I bought the Venu 2 for, it was a simple decision to return and to purchase the newer Instinct.

It wasn’t helped by some poor heart rate readings from the Venu 2 on my first two rides - though this could have been due to the cold weather.

So, whilst the Siri integration is nice, ultimately, it wasn’t enough for me to keep the watch. It is a nice watch, but ultimately, the Garmin Instinct wins it for me, especially now it matches some of the features of the higher end Garmin’s.