After the issues I’ve had previously with the Mac, I wasn’t sure I was going to get another Mac. But I did.

I watched the M1 release keynote after it had finished and was impressed with what I saw. If it was true. However, after hanging around the Mac Power Users forum, I’d seen some interesting Mac apps that I fancied giving a go - things like Hook. I also wanted to continue using Photos, as I hadn’t really found an alternative on Windows that really matched it.

Well, with the reduction in price of the Mac Mini and with education discount, I thought being on the cutting edge would be worth being part of - after all, I’d been impressed with the Raspberry Pi’s and they’re ARM based processors and I knew they were pretty capable devices.

I purchased the base model Mac Mini in the end - it was the cheapest M1 Mac, so it would give me a chance to dip my toe in to the water and see what I was getting in to. With the education discount, it was quite reasonable.

So far, I’ve not really come across any software issues from running an M1 Mac. Some QNAP software for an external drive caddy hasn’t worked, but once setup on Windows, that has worked fine on Mac.

All the Apple apps work fine, but Firefox has some issues here and there. I have downloaded the newest beta, which is a Universal app and works on the Mac without issues.

The biggest issue I’ve had is with Ondrive. Setting it up, it ran in to issues. However, I believe this was due to the fact that I had it as an Arq backup destination and therefore there was a huge number of files stored on the server that it was looking over. I wasn’t able to do a selective sync on startup and then the program would crash. However, once the initial sync had been completed, Onedrive works fine without issues.

A selling point that Apple made was the ability to run iPad and iOS apps. In reality, as others have already said, this isn’t a great draw. In my view, a lot of the iPad apps I would want to use have macOS counterparts, but then others that don’t have a Mac app have been removed from the App Store1. However, there are some exceptions.

One of the big ones is that Overcast, my podcast app of choice, now works on the Mac. This is a big plus for me. I’d been back and forth between Overcast and Pocketcasts for ages, but what kept dragging me back to Pocketcasts was the ability to listen online via the website. 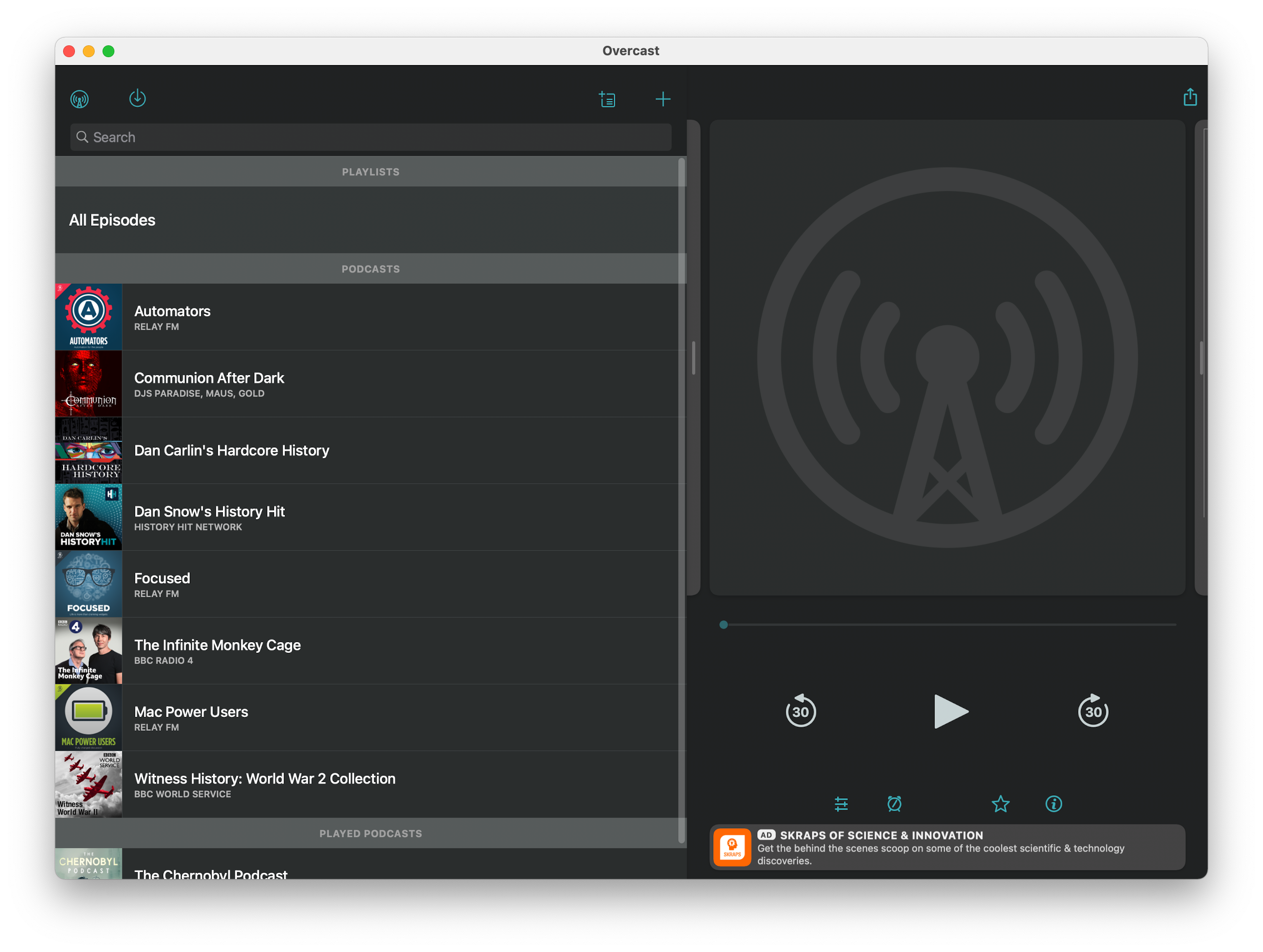 This works nicely with the media keys on my keyboard - play and pause work without issues. It can download the stream if I wanted as well and just generally works as I would hope it would on the Mac.

The second app is Foodnoms. I used to track food via Myfitnesspal, but haven’t for a number of years. I’m now trying to get back to tracking and losing some weight and had been disappointed with the changes made to Myfitnesspal - I also didn’t like the social features of Myfitnesspal.

Foodnoms however, is ideal. It saves the data to my iPhone/iCloud account and means that I’m in control, so if the data is wrong, no one is to blame but myself! I can link to a wider database, but once I start populating with my data, it works and I don’t need the wider database. 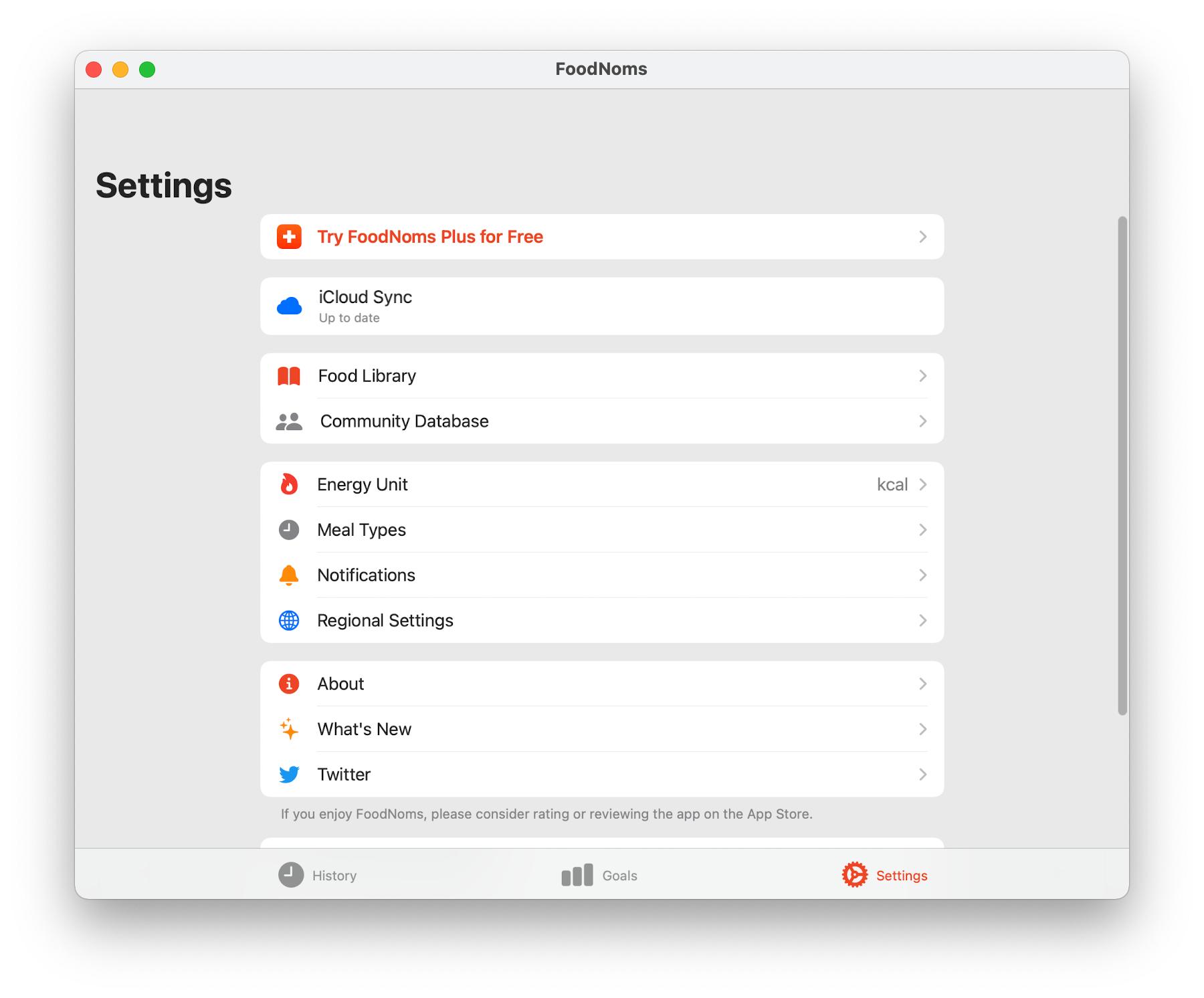 Whilst I might have my phone nearby, sometimes you need to log whilst with a keyboard2. This is where having this on the Mac comes in handy. This means it’s a true replacement for Myfitnesspal, as I don’t need to access the website, but can edit whilst at the Mac still.

Overall, the M1 Mac and Big Sur is decent upgrade over my previous experience with macOS. Issues I had previously are either resolved or have been narrowed down to hardware I was using.

The only downside for the current Mac Mini is the reduced number of USB ports, with the M1 only having two USB C ports, compared to the previous 4 on the Intel ones. However, a USB hub sorts this out and lets me use a number of devices - in addition to using some Bluetooth accessories that I previously hadn’t.