At the end of November, I had to go to Geneva for work - a one day workshop at CERN on fire risk. Considering it was the area I completed my PhD in and work were paying, what was not to like?

Anyhow, after some serious thought, I decided that I’d take my Brompton with me to Switzerland and that I’d enjoy some cycling around Geneva collecting some geocaches. I say serious thought, as it would mean that I would have to pay the Easyjet baggage fee to get there and back again! I did a bit of googling before hand, and I could hire a bike in Geneva easily enough when I got there, but I would run into some issues in that I’d only be able to borrow for a day and that I wouldn’t be able to cycle out to my hotel with it.

So once the decision had been made to take the bike, I chickened out of taking the Brompton just in a soft bag and ended up getting the B+W hard case. I also decided that I needed to get myself a phone mount for the trip as I was going to be relying on the phone for geocaching and for directions when I was in Geneva. The B+W case doesn’t seem to like the extended seatpost of the Brompton particularly well - however, taking the seat off, I was able to get it in the case with no extra hassle. So it was the first time I’ve ever flown with a bike before. Whilst the B+W hard case seems to be sturdy enough to protect the Brompton, it’s not a small case. My concern was hitting my 23Kg weight limit with EasyJet.

Arriving at Manchester, I checked in and then had to deposit my bike with the oversized luggage built. I was concerned during this point that they would release it was a bike and charge me more (EasyJet charge £90 each way for bikes, but I got a check in bag for only £23 each way…) No comment from the guys at EasyJet and whilst the guy at the luggage belt knew exactly what it was (before it went through the scanner), he worked for the airport and not EasyJet so there was no issue there! It also worked out that I was at the limit of the weight - 22.5Kg for the Brompton, case, a small multi tool so I could assemble the saddle again at the other side and my Kryptonite Evolution 4 D lock in (as I couldn’t be sure that I’d be able to store my bike in my hotel room or elsewhere).

When I landed, I decided that I would drop the case off with the left luggage facility at the railway station which meant that I was free to cycle off and away from the airport. I cycled in to the town centre to get some geocaches - part of the reasoning behind me taking the bike was so that I would have some freedom to do what I want when I was in Geneva. 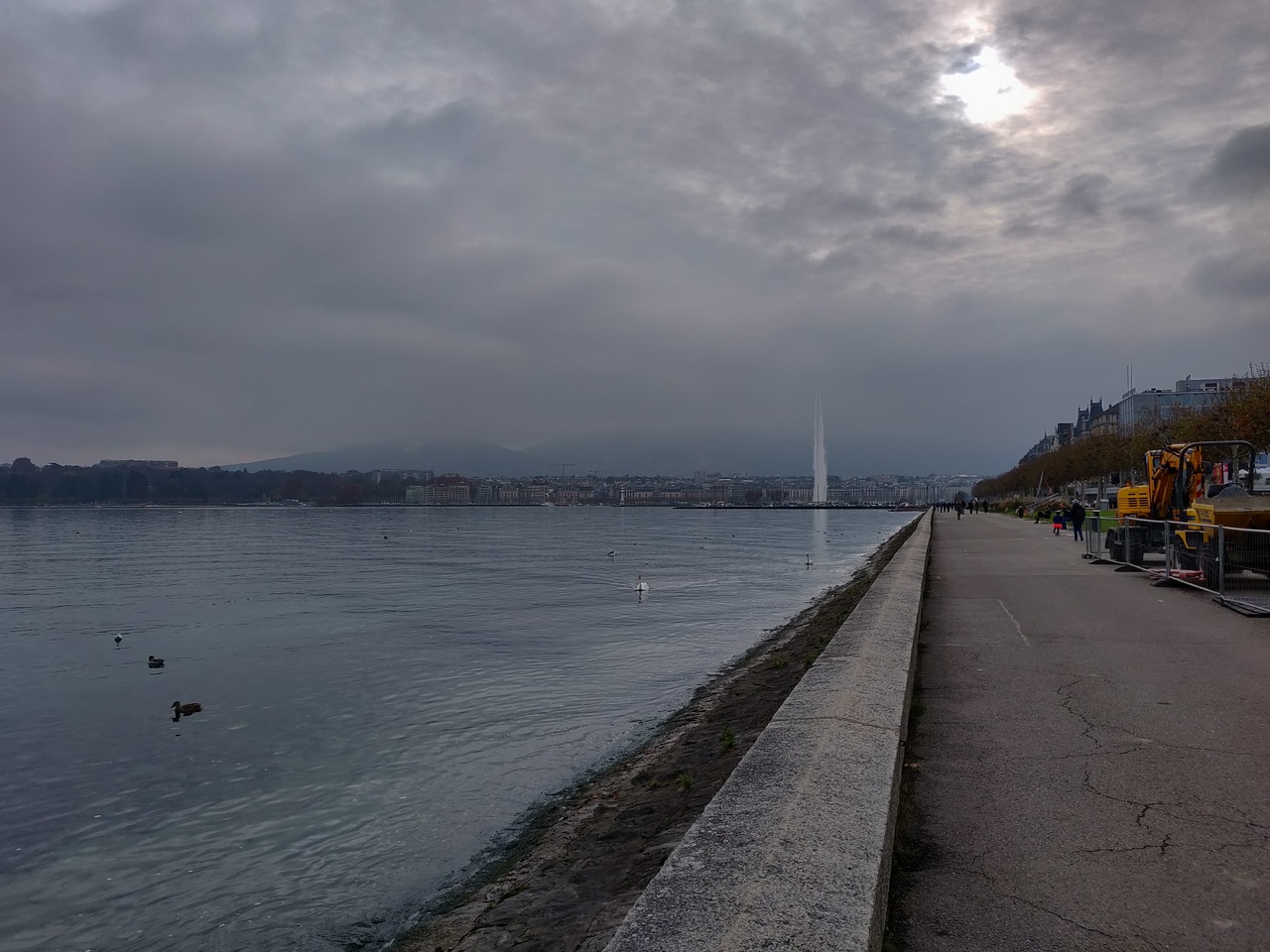 It was a good job that I did take my bike lock, as I used it during my lunch time - unlike the UK, a lot of Geneva seemed to be shut during the Sunday and therefore trying to find somewhere for lunch was a bit more of a challenge. Anyhow, after some lunch, I decided to head back to the hotel, taking in a few my caches along the route.

This proved to be easy enough, being able to use my phone, Google Maps and c:geo, I was able to make my way out from Geneva and head towards France, going through CERN to start with and visiting the Globe of Science and Innovation, where I would be heading on the next day for my conference. 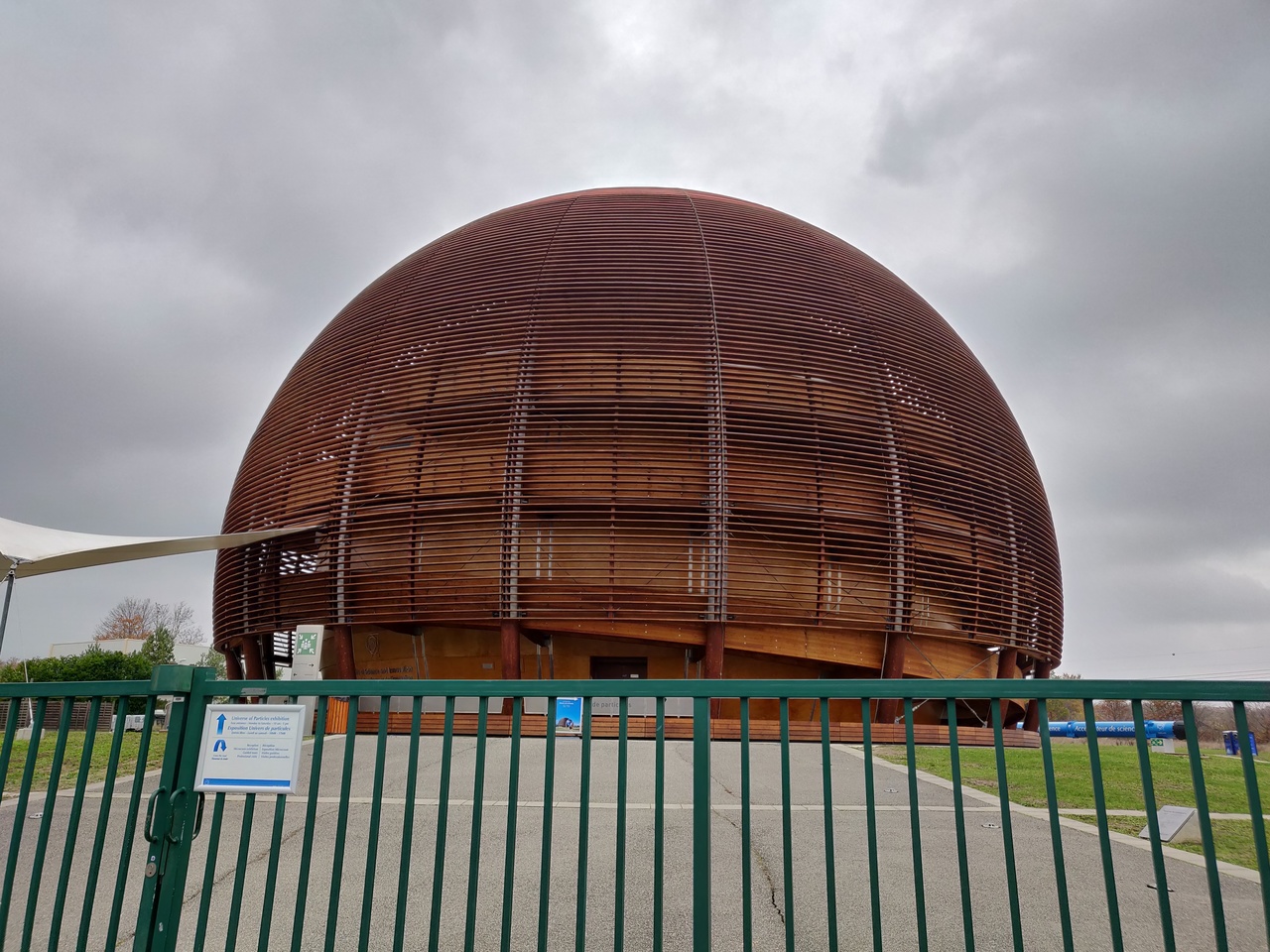 It was perhaps some of the furthest cycling I’d done for a period of time! It was also farily chilly, so I thought I deserved my meal that evening! 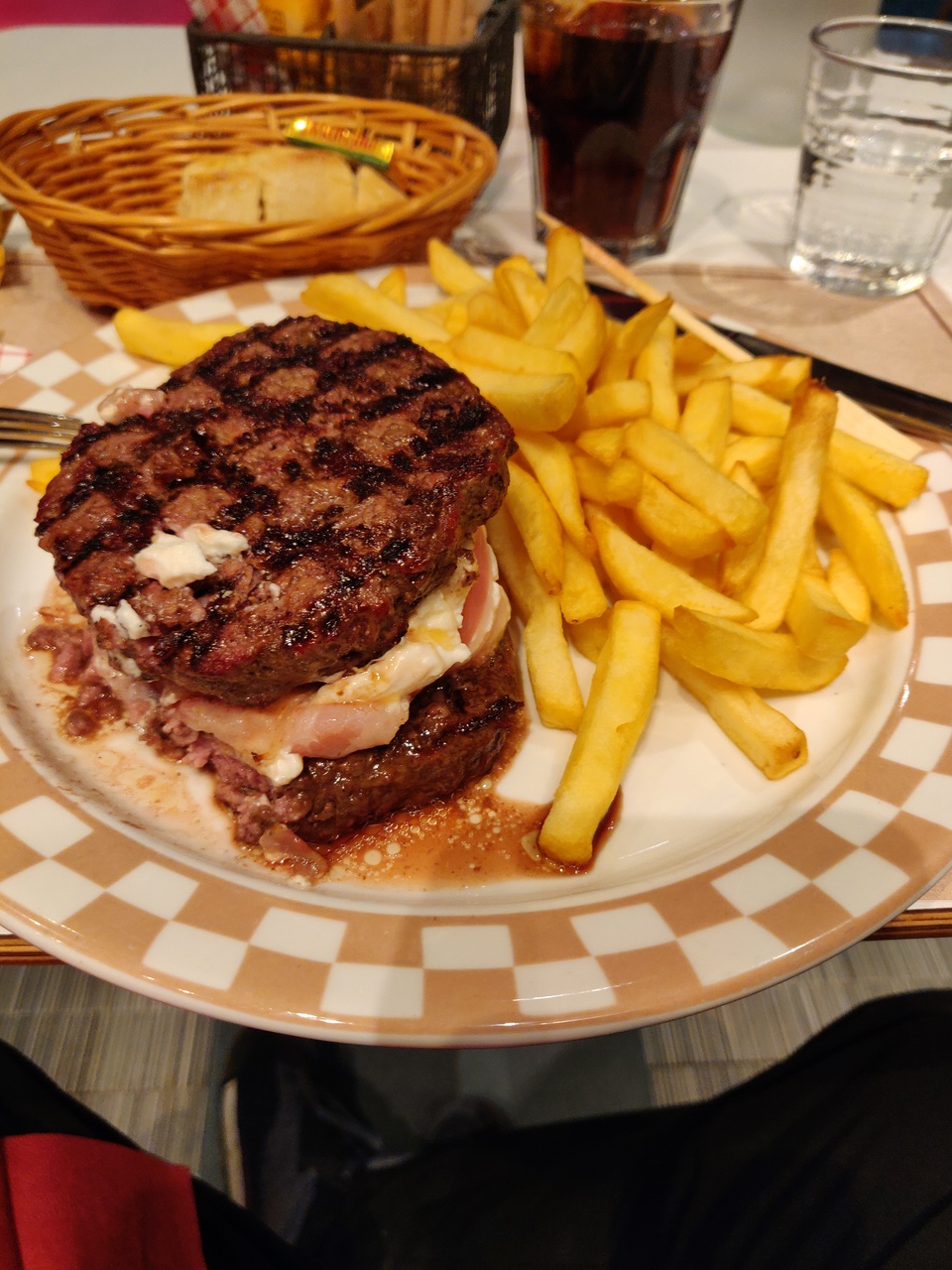 The conference went well - the only issue I had was that I was not able to take the bike in to the event with me. I probably could have tried but the guard who didn’t seem to speak English directed me towards the bike stands. Stupidly, I had managed to bring my bike lock, but left the keys in the hotel… I did leave the bike left there with no lock which was concerning - however, the area was cordoned off for the conference and only conference guests could get in so that put me at ease a bit more than normal - however, it is an experience I wont be repeating again!

At the end of the trip, I headed back to the airport from the hotel. A late check out meant I could spend the day in the hotel before heading out to the airport. I put the route in and decided to follow Google Maps directions to get to the airport, even though looking online, OpenStreetMaps didn’t really indicate the best cycle paths to the airport. However, I needn’t have worried - the route had a cycle path directly to the airport! All the way down the main road, past CERN, there was only a small section of road that I had to join for a small period of time. 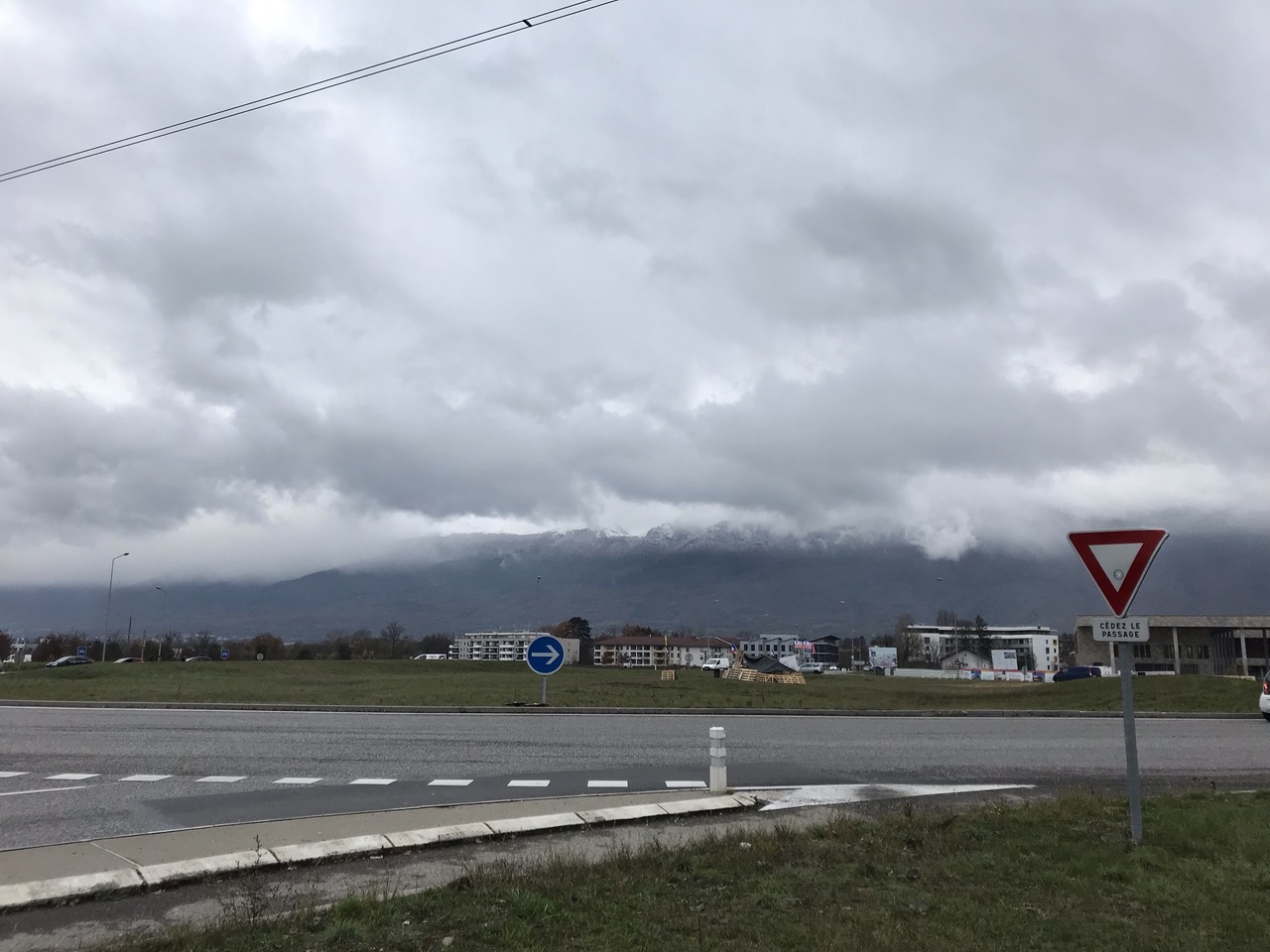 Other than that, I was able to get directly to the terminal on my bike. I was quite impressed. After all, I’ve cycled to an airport only once (a London Brompton Club ride to Heathrow) and that didn’t seem as well thought out or catered for like this one did.

In comparison to what I saw in Geneva, the UK is far behind the curve. If the cycle path was separated from the rest of the road, then I still didn’t feel like the cars were out to kill me. I had to cross a roundabout in France and the cars all slowed for me to cross the road as I went across - in the UK, you would have car drivers speeding up to get across the zebra crossings before you go there! Not here. It was delightfully refreshing (but also somehow off putting!)

Overall it was well worth taking the Brompton with me. The B+W Case seemed to work well, though it is huge and I now have to find somewhere for it in the house! I imagine it might well live in the shed, replacing one of the bikes in there currently.

Being able to leave the case at the left luggage (for a cost of 20 CHF) wasn’t bad and meant that I was totally free as soon as I landed to do what I wanted to do. If I was to repeat the trip, it would perhaps be to travel with a different bag rather than the T-Bag. This was the bag I’d chosen for the trip and whilst it works nicely with the Brompton, I found it to be awkward and a pain during the trip through the hotel or when I didn’t have the bike. I much prefer a backpack, as it would have distributed the weight more and made less painful for my shoulder!

In terms of caching, I managed to complete 5 whilst I was over, 4 in Switzerland and 1 in France - not as high as I might have liked, but it is significantly harder trying to find a geocache where the hint and even the description is written in a foreign language, as much as Google might help! I dropped a trackable off whilst there, so we’ll see where that one ends up. At the time of writing, it’s still there and no one has collected it yet!