I’ve been mixing macOS and Windows for a number of years. This hasn’t normally proved to be problematic in any way and I’ve had the best of both worlds.

One program that I couldn’t live with out on the Mac is Alfred. Alfred is a keyboard launcher, allowing you to start and run programs using a key combination and not having to move away from the keyboard. It also provides a quick calculation tool, which allows you to undertake calculations quickly. It was extensible using plugins and had a large range of other tasks it could accomplish.

Whilst macOS has Spotlight built in, I would always replace it with Alfred as soon as I could, because of the extensibility of Alfred.

On Windows however, there are a number of different alternatives that I’ve been using for a while. I would argue that none of them are quite as good as Alfred, as they don’t have the same range of plugins available (perhaps because there is more choice), but over all, I’ve been having a play with a number of them.

Windows itself has the Start menu, which allows you to type in the name of the program you want to launch.

However, this is about the extent of it. 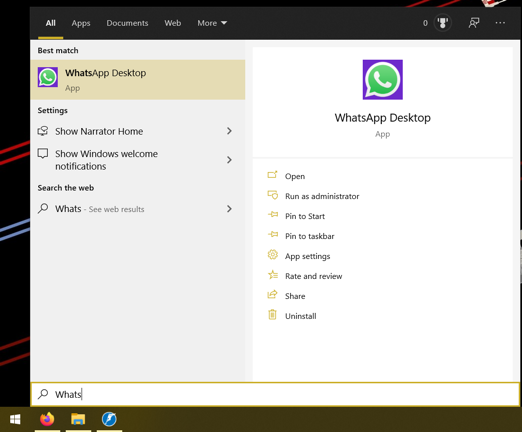 It can also do a calculator and search for folders on the PC, but it’s not as robust as some of the other software solutions below and it also includes data from web searches and that can make it harder to use and find information.

Launchy has been my go to for a Windows Alfred alternative. It’s been fast, easy to use, straightforward, and no issues at all.

That is, until I purchased a 4K monitor. This is when I started running in to issues.

Due to its age, Launchy isn’t HiDPI aware and you have to manually override the settings in Windows for it to display for a 4K screen. Overall it didn’t seem to effect the use of the software, it was still able to work.

However, I’ve recently noticed that launching programs in Launchy on a HiDPI screen will launch the programs in the low DPI version. Most noticeably, this effected Postbox, where it was very obvious it was launching in low definition, but I also noticed in other programs, including Outlook and QOwnNotes.

I can’t figure out how to get to the bottom of it, so I ended up trying different alternatives. However, where I’ve still got a 1080p screen (my Lenovo Legion laptop) it works without any issues at all, so it’s still in use there.

The other issue with Launchy is accessing Windows UWP apps and even apps like Microsoft Word and Excel. I’ve got these installed via Office 365 and Launchy doesn’t seem to want to be able open them - perhaps with some investigation of the settings, this might work.

Windows PowerToys is a number of programs, one of which is a keyboard launcher. I tried this as I’d downloaded Windows PowerToys for some of it’s other features, but I thought I’d give it a go.

In comparison to the rest of the items, it’s slow and initially, very buggy. When I first tried it, it wasn’t able to add up correctly and it would often give me rounding errors when performing calculations, which is a fairly major bug.

I’ve updated it a few times since then and have gone back and tried it again and have again been disappointed with it. It’s pretty, and it often works, but it’s not great up at picking up folders and it can be very slow to open and search, which isn’t ideal when you want something snappy and quick.

Fluent Search is an app that I found in the Microsoft Store. This has the benefit that I could install it on my work laptop if I wanted to, as I’m permitted to install apps from the store on the laptop without issues 1.

This seemed to work - it allowed me to search for items. It’s quick and it finds the items on the computer.

For me, one of the main uses of these quick launch programs is for quick calculations. Fluent works fine for that, but the calculator would often be quite down the list - however, if you enable Advanced Settings, I found that the you can change the priority and this can be moved to the top. 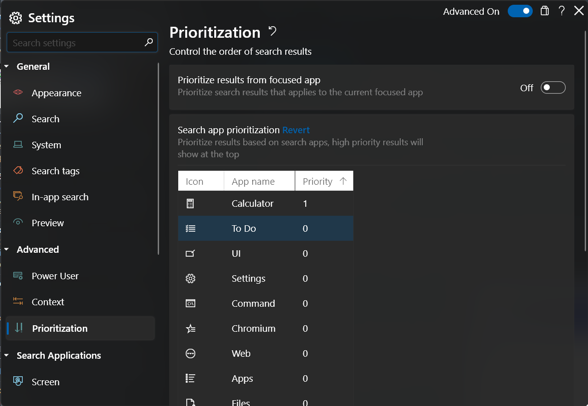 However, it has a number of downsides. Firstly, every time it starts, it requires admin rights and therefore pops up the request on boot. This isn’t ideal and gets tiresome, even if you start up the PC only once per day.

Secondly, I cant seem to add paths to the software. Therefore, my folder of portable apps isn’t found and it wont launch these items, which is part of the reason I want to use it. This makes it significantly less useful to me.

Therefore, it’s not a great solution for me, though it does look pretty polished and it works far better than the PowerToys solution.

In searching for some other programs to replace Launchy, I found Executor. the website looks a bit dated, but the program is still being updated, with the latest release being on the 26 April 2021.

This seemed to tick the boxes - I’m able to search folders, files and programs. There are a huge number of settings to play with, though the panels are slightly old fashioned looking - however, this isn’t what you see during day to day use, so that isn’t the end of the world. 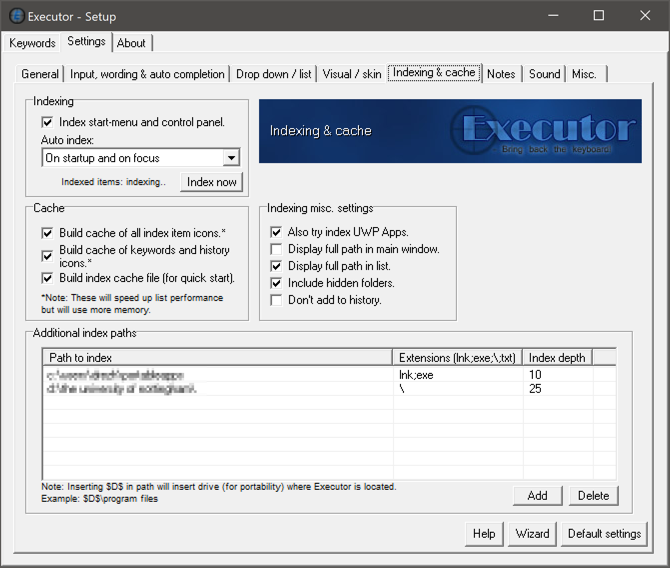 It did throw up an interesting bug, where I ended up finding that the icons in my taskbar had managed to shrink somehow. Closing and reopening the programs didn’t seem to solve the issue either, so no entirely sure what was happening. This seemed to be the only software that caused the issue.

Like Alfred, by default, Executor also records clipboard history, so you can access it at a later date. Unlike the inbuilt Windows history, you have to select the previously copied data and then press paste to input this date. Yet, the trade off is that it isn’t limited to 25 past clipboards like the inbuilt Windows one. This can be kept and stored between restarts of the program if you want it to, but by default, it doesn’t save between sessions. 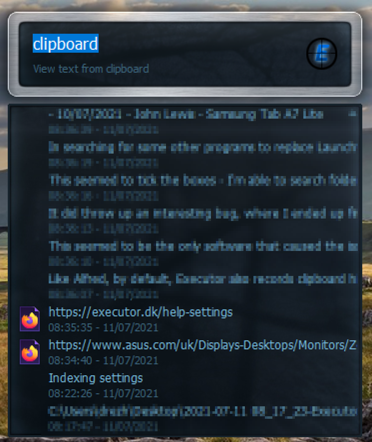 The settings page is in depth and worth reading to see what all the options are for the program!

One downside for me is the calculator tool, which relies on you having to type # before it’ll perform the calculation, which is a bit of a drag when wanting to do a quick calc, though I’m sure that this is just muscle memory. Another slight change to the workflow from Alfred is that the app opens the results within a new windows, so Ctrl+C is needed to copy the results to the clipboard before pasting, where as both Launchy and Alfred will allow you to press enter to copy it directly to the clipboard.

There are a number of different software solutions on Windows to replace Alfred - none of them are quite the same, but all seem to bring the basic functionality to the table.

Launchy is the best of the bunch that I’ve used, but on a 4K monitor, it doesn’t perform well and means that the rest of my workflow isn’t suitable either, so the only real contender for me is Executor.

It’ll take some effort to get over the muscle memory of Launchy and Alfred perhaps, but I’ll end up with a solution that will work nicely.